After three months of theory classes, we got the Cessna course. One week of learning all about the Cessna 172, the airplane we were soon going to fly! After the Cessna theory exam, it was time for the simulator sessions. The simulator had all the features of the Cessna cockpit, so we could practice well and simulate flights on ground.

A few weeks (and quite some simulator sessions) later, I had my very first flight! In this first flight, the instructor did the take off and when we were at a safe altitude, he let me fly by myself!! We practiced straight level flight, then climbs, descends, acceleration, deceleration and turns! It was quite basic stuff, if I look back at it now, but as it was my very first flight, it was all very exciting and quite challenging as well.

I learned to be very precise, not giving too big inputs on the throttle (power) and the control wheel, to give just enough input to make coordinated climbs and turns. When I managed these basic manoeuvres well, we continued the next lesson with take offs and landings. The instructor was of course really careful to not let me make mistakes, but in general I really felt that I had control over the plane.

The next lessons, I practiced a lot of manoeuvres and landings. We flew from Cuatro Vientos (where our school was), to a small uncontrolled airfield called Casarrubios, where many flight schools practiced landings and take offs. We made touch & go’s, which basically means that we land the plane, stabilise the plane and then add power to take off again on the same runway. So you touch down and go take off immediately after!

When the instructor saw that I mastered the touch & go’s, after about 15 flight hours, I got to do my very first solo flight! This meant that the instructor would get out of the plane and I would make one take off, two touch & go’s and a full stop landing all by myself!

I was very nervous for my first solo and actually on the day that I was supposed to have my solo, I was not performing as well as I did the other days. The instructor therefore doubted to let me go solo that day. But when he told me: ”If the next two landings are good, you will do your solo today!” I then found all my energy and motivation and showed him I could do it!!

After the two nice touch & go’s, he said over the radio frequency: ”American Flyers 114, request a full stop landing, taxi to the apron and then taxi for solo take off”, I knew I was going to be solo!

The instructor left the plane, I taxied all alone towards the runway, took a deep breath and told to the tower: ”American Flyers 114, ready for departure”. I was cleared for take off and I lined up with the runway. Another deep breath, I set take off power, checked all my engine parameters, the plane started to move. I said all callouts out loud, even though there was nobody that could hear me. I was all alone in the plane. At the rotation speed, I slowly pulled the control wheel, the plane lifted off the ground. I made a left turn to stay in the traffic pattern, I looked down at the runway where I just took off and all I could do was SMILE. I looked to the right, where my instructor used to sit, but the seat was empty. It was me flying a real airplane, with nobody next to me, this was the best thing I ever experienced.

I made a perfect traffic pattern, turned the plane towards runway, set the flaps for landing, was cleared for a touch and go and landed the plane smoothly on the runway. I lifted my flaps, stabilised the airplane and set take off power, rotated and took off again – my very first solo touch and go!

The more touch & go’s I did, the more I felt comfortable with myself and my capabilities. I made a final full stop landing and taxied proudly to the school’s apron where all my classmates were waiting for me to give me a beer shower, cut my hair and draw on my face.

My very first solo. I did it. It felt so empowering, I was so proud of myself and all the studying had been so worth it. This was what I always wanted to do and I made it!

Find below a video of my own experience during flight school!

3 thoughts on “My own experience #04: My first flight” 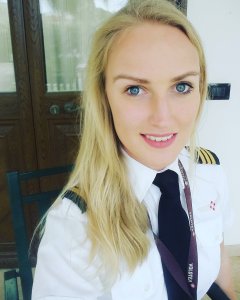